The Dositronic G for gestation sows housed in groups allows feeding individually of each animal in a controlled manner according to their needs, improving the body condition upon arrival to farrowing and significantly reducing wasted feed. The sows can enter any free station in the pen, without competition with the other animals of the group, once inside, a transmitting tag the fixed in the ear is detected by the antenna of the station, then the electronic dispenser feeds the sow with the volume of feed that corresponds to her day of gestation in the curve that has been assigned to that animal, according to its parity and body condition. The sows eat isolated from the others and the feed is gradually dispensed as they are ingesting, so they eat the exact amount that corresponds to them avoiding waste of feed. Once the ration of the day is administered, the dispenser stops, and the sows leave the station, leaving it free for the next sow.

There are no reviews yet.

Be the first to review “Dositronic G” Cancel reply 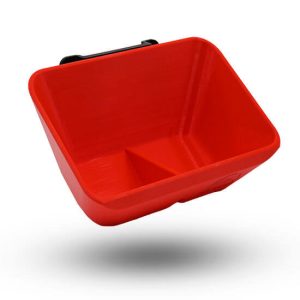 The Wall Pan is a wall feeder that takes up

1/2″ Stainless Steel Down Tube for the VRH-3 Valve, no

While we currently do not offer online shopping, we would be more than happy to take your order via phone or redirect you to your nearest American Resources, LLC Dealer. Please reach out with any questions.